A friend recently noted that I have not posted much poetry lately. Several reasons, including a lack of writing based on a fear of mediocrity. Seems like an odd excuse, but a way of justifying creative ennui nonetheless. And so I have dredged up another piece from a time when confidence was not as much of an issue and offer it here. 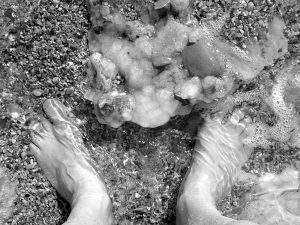 If I were to write that I am the sea,
(waves rolling, billowing,
cold and vast with secrets hidden
in dark and hallowed depths,)
I would be lying,
for I know I am not.

I may dip my toe
into the foam along its shore,
feel humbled by churning tides,
and watch as a pomegranate sun
lingers at water’s edge,
still, I am just a creature of the land.

I observe the sea, taking without remorse,
giving without desire.
When it kills, it does so without intent,
while, in turn, cradling the essence of life.
Though I am born of water,
I am surely not the sea.

I know of sand crusted layers
rippling across its silent floor,
a place where trilobites once ruled,
where bones and barnacles wait to be entombed.
And just as whales returned home
I ache from an ancient memory long passed.

I envy the sea, at peace with itself,
nothing to prove, no resentments.
It has found its place and settled
into its eternal dance with the moon.
So when I sleep and sink
deep within dreams, at last,

the sea and I are one.

Posted in Poetry
« My Brother’s Keeper
Puffs of Smoke »