I Want My Flag back 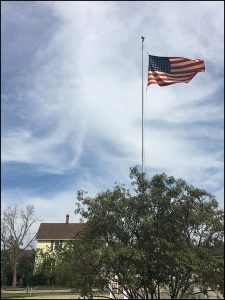 The following piece was written last October. I made unsuccessful attempts at finding an Op-Ed home for this essay, so I am offering it here instead. As always, your thoughts and opinions on this will be greatly appreciated.

Over the years I have wondered, sometimes out loud, about the actual definition of the word “Patriotism”. I remember reciting the pledge of allegiance before the first period class in junior high school, singing the Star-Spangled Banner before a ballgame and, in particular, I would always belt out America the Beautiful whenever it was played at any event. I knew enough about history and the idealism embodied in the Declaration of Independence along with the sanctity of the U. S. Constitution.

“In order to form a more perfect union.” This phrase alone, with its lofty goal, implicitly infers that our country would always need to diligently stand guard over the tenets so carefully crafted by our founders. That our nation was not perfect, but if we followed the precepts as laid down, we might be able to find the clear pathway towards that more perfect union.

Webster’s dictionary defines Patriotism as the “love and devotion for one’s own country.” Regardless of the wording, the definition within common usage of patriotism remains elusive. How do we define someone as a patriot, or as some suggest, a True Patriot? The most important word in Webster’s listing is “devotion” for the subjective nature of this word has been redefined over and over for decades.

When I was attending high school in the late 1960s in Berkeley, California, the anti-war movement was a living breathing entity that encompassed the entire community. Those who were protesting the Vietnam war believed in an ideology of ethics and fairness that they felt was embodied in the US Constitution and all of the accompanying literature written by the framers of the Constitution. Most of the protestors were devoted to remaining true to these ideals as expressed by our nation’s founders, or at least their interpretation of that ideology.

During this time, the most common bumper sticker throughout the US read, “America, Love It or Leave It”. The people who placed this slogan on their truck or auto were no more or no less patriotic than those who demonstrated against the war. From their perspective, people who burned the American flag or who were vehemently opposed to the policies of our government were misguided and perhaps even anti-American. This was far from the truth, yet it was also understandable if one whole-hearted believed that our government was honestly fighting the spread of communism by intervening in conflicts in Southeast Asia.

And even though we were a nation divided, I continued to believe that each of us was a patriot in our own way and that stars and stripes continued to stand for the basic ideals I had faith in myself.

Over the past decade I have begun to see the symbol of our country in a different light and I do not like how I feel when I see a flag flying over the top of a pickup truck or part of a bumper sticker promotion the National Rifle Association. Not so long ago I would have expected a Confederate flag to be in the place of our flag. The “Bars & Stars,” as the confederate flag was known, symbolized an era that was abhorrent in terms of the civil rights of many humans and a time of segregation and government sponsored racism. Now, at least in many cases, the Confederate flag has been replaced and many of those who espouse division in our country fly the US Flag as their symbol of intolerance.

I resent that the flag I have loved my entire life has, at least in my eyes, become a symbol for a perspective that I completely disavow. I have not flown the flag on the Fourth of July or on Memorial Day, as my wife and I used to do, and when I do see it flying over someone’s yard, I grimace, wondering if the people who raised that flag really understand what it means. That the phrases, “We the People…” and “All Men are Created Equal…” refers to everyone, not just the folks who believe or look exactly as they do.

This does not mean that all those who fly the American flag are extremists, by any stretch of the imagination. Most people display this symbol of our country out of respect for what we have accomplished and for the love of this nation, but I remain skeptical when I see it, which is the real tragedy.

I long for our flag to once again fully represent the ideals as set forth by the founders. The ideals representing the notion that we are all equal under the eyes of the law and regardless of religion, race, color, gender, physical ability or sexual preference, we are all Americans and citizens of this great nation. I want to stand up and be able to sing America the Beautiful at the top of my voice and really mean it, without reservations. I want my flag back.

Posted in Opinion
« Puffs of Smoke
Idealism vs. The Idealist »